As we approach the 4th of July, I always start to feel my patriotism kick in a little bit harder than normal. I get all emotional thinking about our flag, Mount Rushmore, and our brave military. Thoughts of apple pie and fireworks fill my brain. I thought I should create a tradition of having posts that talk about something uniquely American. So let me tell you about George Frederick Kunz, America’s very first gemologist.

You may be asking yourself what the heck a gemologist is! It’s basically someone who can identify gemstones. Yours truly is a gemologist, and let me tell you, the road to becoming one is not easy! I worked my butt off to learn all the tricks of the trade. A good gemologist will be able to look at any gemstone and tell you what it is. Garnet or ruby? Emerald or peridot? They’ve got you covered! They may have to do some tests, or use their microscope, but that’s all part of their training.

Of course, being an official gemologist is something that’s relatively new. The very first school to call their graduates gemologists was the Gemmological Association of Great Britain (you’ll have to forgive the Brits for their spelling errors….), and that was only back in 1908. So gemologists as we think of them today have only been around for 100 or so years. The very first American graduate was a guy named Robert Shipley. He graduated in 1929. Once he returned to the States, he started his own American school for gemology. A classic American entrepreneur! Even though that was back in 1931, the Gemological Institute of America (GIA) still exists today. And in my opinion, it’s the best place to become a gemologist.

My alma mater, where they train gemologists, Carlsbad, CA

Anyway, let’s get back to George!

A rockhound makes a good gemologist

George was born in New York City in 1856, long before any institution was training gemologists. He was a rock collector from an early age, and the expanding New York City was always digging up something for a tunnel or road. That gave George plenty of opportunity to find rocks. One of his first big finds was a 9 pound, 10 ounce garnet crystal, which now sits in the American Museum of Natural History. By the time he was 20, his collection of rocks numbered around 4,000, and weighed in at over two tons! He sold the whole set to the University of Minnesota for $400. George was awfully proud of this, and felt he had established himself as a “recognized mineralogist.” (Note that he didn’t call himself a gemologist, because that term wasn’t being used yet.)

Basically, he was a pretty cool guy, and I could go on and on, but to me, there’s really three important things that stick out.

When he was just 20, he was trying to find a buyer for some green tourmaline he had found up in Maine. Tiffany, at the time, sold only “precious” stones – diamonds, rubies, emeralds, and sapphires. (I’ve talked before about how ridiculous the term “precious” is – read more here). Undaunted, George walked into their New York City office and persuaded the big boss, Charles Tiffany himself, to buy the tourmaline. This was the beginning of a relationship where Fred found and acquired gems, and then sold them to Tiffany. They started to work together so frequently that when George was just 23, Tiffany offered him the job of Gem Expert.

George loved working for Tiffany! In fact, he was having such a good time that he end up staying with them for 53 years!

#2 – He introduced colored stones to the United States.

If it weren’t for George, I think the market today for colored stones would look very different. George, like me, was rather disdainful of the focus on so-called “precious” gemstones. Especially when he was able to see first hand the wide range of colors available. George traveled, not just all over the United States, but all over the world. Everywhere he went, he looked for unique gemstones for Tiffany to use in their designs. Thanks to George, Tiffany’s used tourmalines from Maine, sapphires from Montana, opals from Mexico, freshwater pearls from the Mississippi, and kunzite from California. Tiffany led the way, in terms of design and color, for American jewelry.

examples of colored stones in the rough

Listen to what George had to say in an interview with the Saturday Post:

In those early days, as I have said, no so-called fancy stones were on sale in any jewelry store in the country; one could scarcely find them in a lapidary’s shop, yet, reviewing those that I had gathered, it seemed to me that many ladies ……would be happy to array themselves in the endless gorgeous colors of these unexploited gems. As I looked over a collection of them, with the sunlight imprisoned in the sea-green depths of the tourmaline, lapping at the facets of the watery-blue aquamarine, flooding the blood-red cup of the garnet, glancing from the ice-blue edges of the beryl, melting in the misty nebula of the moonstone ….I thought, how could a woman ever resist their appeal?

George was right! Ladies loved them, and still do!

Not everyone is cool enough to have a gemstone named after them, but George is! In 1902, an unidentified pink crystal from California was sent to Tiffany’s. George correctly confirmed it was spodumene, but he hadn’t ever seen that particular color before. The owner of the stone was Charles Baskerville, a chemistry professor at the University of North Carolina. He ended up naming the stone kunzite, in honor of George, in 1903. 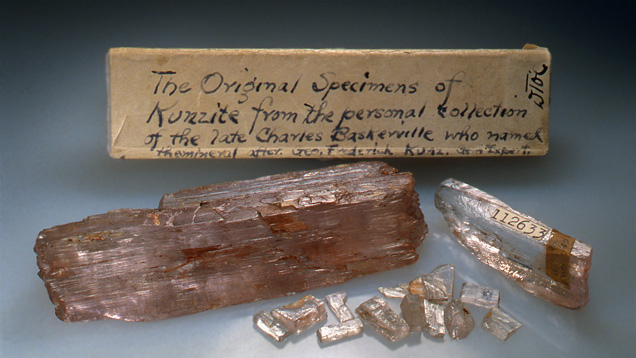 Since its discovery, kunzite has found its way into lots of jewelry! The crystals can be quite large, and the shades are very beautiful (although I’m a sucker for anything purple!). Besides California, kunzite has also been found in Afghanistan, Brazil, and Madagascar.

A scientist with no formal education

George was essentially self-taught and didn’t receive much in the way of formal education. What set George apart from others at the time were his collecting abilities, and his eye for unique stones. His influence on the colored stone market in America helped Tiffany be at the forefront of designer jewelry. His expertise was noticed, and many institutions gave him honorary degrees, including Columbia University, the University of Marburg, and Knox College of Illinois.

George considered himself a scientist and public servant. In his lifetime, he authored over 300 article and plenty of books, including Gems and Precious Stones of North America (1890) and The Curious Lore of Precious Stones (1913). He was one of the founders of the New York Mineralogical Club, and a curator at the American Museum of Natural History. George was an advocate for both the metric system and the use of carats as a way  to measure gem weight.

George died in 1932, at the age of 76. He worked for Tiffany’s right up until the end, and by all accounts, loved every minute of it! We should all be so lucky to love our jobs that much!

At the end of the day, George’s legacy is all about his love for gems and the collections he created. Many of his collections are still on display in museums across America. For example, you can see the Morgan-Tiffany collection of his at the American Museum of Natural History in New York City and many of the Tiffany jewels at the Walters Art Museum in Baltimore.

What special gem do first ladies love the most?

The Hope Diamond is a Star, literally!

This site uses Akismet to reduce spam. Learn how your comment data is processed.

The Gem Gal. Happily obsessed with gems and jewelry! If you're hooked on sparkly things...